What is the specific difference between LED and LCD？ 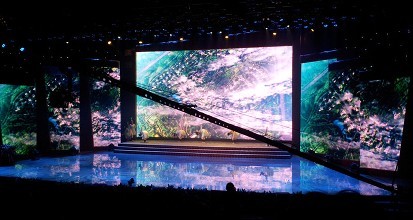 What is LED, what is LCD and what is the difference between them, let’s take a closer look today. Ryham Optoelectronics will share the common knowledge of LED and LCD with you.

What is LED and what is LCD?

LCD is the abbreviation of Liquid Crystal Display. There are several types of TFT, UFB, TFD, STN and other types of LCD screens.Its structure is mainly to place liquid crystals in two pieces of parallel glass. There are many small vertical and horizontal wires in the middle of the two pieces of parallel glass. The rod-shaped crystal is controlled by the power on or off molecules to change direction, refracting light to create a picture.

LED is an abbreviation of light-emitting diode. LED applications can be divided into two categories: one is LED display screens; the other is LED single tube applications, including backlight LEDs, infrared LEDs, etc. Its working principle is that in the PN junction of some semiconductor materials, when the injected minority carriers and the majority carriers are recombined, the excess energy is released in the form of light. The electric energy is directly converted into light energy; the reverse voltage is applied to the PN junction, and it is difficult to inject minority carriers, so it does not emit light. This type of diode made using the principle of injection electroluminescence is called a light emitting diode, which is also known as LED.

What is the difference between LED and LCD?

1.Brightness. The response speed of a single element of the LED display is 1000 times that of the LCD screen, and its brightness is more advantageous than the LCD screen. The LED display can also be illuminated correctly under strong light, and adapt Low temperature of minus 40 degrees.

3.Viewing angle. The angle of the LCD display is very limited,  as long as the deviation angle is slightly larger, you can not see the original color, or even nothing; LED can provide a viewing angle of 160 ° with great advantages.

4. Refresh rate. LED uses electrical energy to convert light energy, using the injection principle, so its refresh rate is higher, and then better in video processing.

5. Contrast. The currently known relatively high contrast LCD display is 350: 1, but in many cases, can not meet various needs, but the LED display can reach higher and more widely used.

6. Appearance. LED uses light-emitting diodes as the basis, compared to LCD, its display can be made thinner.
7.Scope of use. LED display is more widely used than LCD display, it can display a variety of text, numbers, color images and animation information, can also play TV, video, VCD, DVD and other color video signals, more important The advantage is that multiple screens can be used for network broadcasting.

8. Service life. LED display can generally support about 100,000 hours, under normal circumstances, can be used for decades, but LCD is much less.

9. Color. LED screens is more real than that of LCD screens. This is because LED TVs have a much larger color gamut than LCDs.